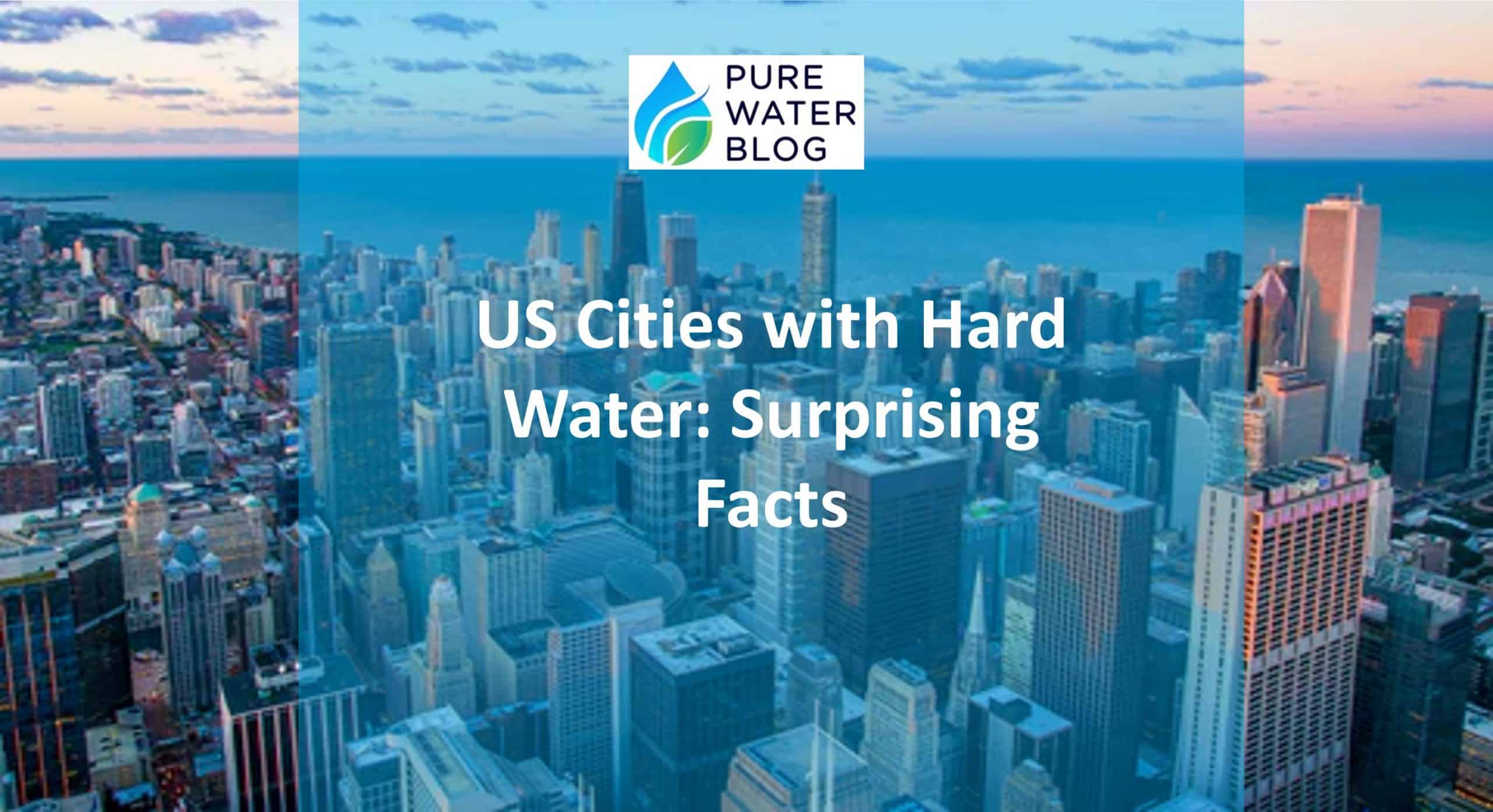 If you are a homeowner in the United States, there is a good chance that your city has hard water. In fact, according to the American Water Works Association, approximately 85% of Americans receive their drinking water from systems with hard water. So, what exactly is hard water? And which cities have hard water?

The six US cities with the hardest water are Indianapolis, Las Vegas, Minneapolis, Phoenix, San Antonio, and Tampa. The average hardness for these cities is 18 grains per gallon or 309 parts per million. For perspective, this is almost 5 times as much hardness ions as soft water has.

In this article we explore which cities in the US have hard water. We also cover hard and soft water in the various states and what you can do to address hard water in your drinking water.

What Is Hard Water

Hard water is water with high concentrations of calcium and magnesium. These two minerals are known as hardness. Hard water is most commonly found in regions with limestone or chalk deposits.

Hardness concentrations are usually presented in units of milligrams per liter (mg/L) of calcium carbonate. These units are the same as parts per million (ppm).

Hardness is also reported in grains of hardness per gallon of water – grains per gallon (gpg).

The following table presents the classifications of water hardness as both mg/L of calcium carbonate and grains per gallon.

Hard water can cause several issues in your home. It can reduce the efficiency of your water-using appliances by leaving deposits on pipes and fixtures, causing them to clog or become corroded. Additionally, it can make cleaning difficult, as soap doesn’t lather properly with hard water.

As a result, you may find yourself using more detergent and cleaners to get the same level of cleanliness. Lastly, hard water can also leave behind mineral deposits, known as scale, on your dishes and other items.

Hard water can reduce the quality of your water if left unchecked.

Where does hardness come from?

There are two types of minerals that serve to make your drinking supply “harder.” These substances, calcium and magnesium, can be found in the soil and bedrock that groundwater flows through. The longer water sits in contact with these minerals, the more it dissolves them.

Areas where drinking water comes from underground aquifers tend to have higher levels of hardness than those that get their water from rivers and lakes. This isn’t always the case, but it is true for most cities.

Testing your home’s water supply for hardness is necessary to determine what safety and quality concerns you may have. You can easily test your own water at home with a DIY test kit. Or, if you’d rather leave it to the professionals, you can contact your local water supplier and ask them to test the hardness of your water.

If you get your water from a public water supply, the utility conducts routine testing. You can call them and ask for a copy of the most recent water quality report. This report should tell you whether your water is hard or not.

Read my article about testing for hardness.

Hard Water in the US

A large part of the United States has hard water. The US Geologic Survey reports that 85% of Americans drink hard water.

The majority of the USA has hard water, so it’s likely that you live in an area with hard water. The map below depicts the different levels of water hardness across America.

There are many factors that determine the hardness of your drinking water. One important factor is where you live. In general, states can be divided into four groups that describe their water quality:

The following table summarizes the relative hardness of drinking water by state.

Which states have hard water?

States with high levels of calcium and magnesium in their water sources, have hard water. Surprisingly, the states with hard water aren’t clustered together.

There are several reasons why a particular state has hard or very hard water. These include:

The 5 states with the hardest water are:

Which states have soft water?

About 15% of the US has soft or very soft water. These areas are fortunate enough to have soft water, which is ideal for drinking, cooking, and other domestic uses.

The 5 states with the softest water are:

Some regions of the United States experience problems with hard tap water, but some cities are more prone to this issue than others. If you live in one these areas, it is important that your home has a water softener.

What to Do About Hard Water

Hard water can be a nuisance and has been linked to decreased energy efficiency, damage to plumbing, and even health issues. If you live in one of the cities above or have hard water in your home, you’ll need to treat your water to reduce the hardness.

The most effective way to soften your water (reduce the hardness) is to install a water softener. A water softener works by exchanging hard ions (calcium and magnesium) for soft ions (sodium). Water softeners also require maintenance, like regular regeneration of the resin bed.

Other methods to reduce water hardness are not as effective and may include reverse osmosis systems or chemical ion exchange.

How do water softeners work

Water softeners use a process known as ion exchange to remove hardness from the water. The process works by exchanging hard ions (calcium and magnesium) for soft ions (sodium).

The ion exchange resin is placed in a tank, and the hard water flows through the media. As the water contact the resin, the calcium and magnesium ions adsorb onto the surface of the media. The softened water is then sent to the rest of the house for drinking, bathing, and cooking.

Eventually, the IX resin becomes saturated with hardness ions. At this point, it is regenerated with salt brine to flush away the calcium and magnesium ions. These ions are exchanged for sodium ions in the brine solution.

Once the resin has been regenerated, it is flushed with clean water and then put back into service.

Which areas have the hardest water?

The areas of the US with the hardest water include Indianapolis, Las Vegas, Minneapolis, Phoenix, San Antonio and Tampa.

What is the best method to soften water?

The most effective way to soften your water is by installing a water softener. This type of system removes hardness from the water using a process called ion exchange.

How common is hard water?

Hard water is very common. In the US, approximately 85% of homes have hard water. Of these residences, approximately 33% have a water softener to reduce the hardness.

Which countries have hard water?

Hard water is a problem for many people all over the world. Countries known for having hard water include the United Kingdon, the US, Canada, and Australia.

Hard water is a fact of life for the vast majority of people in the US. If you live in cities with hard water, like Minneapolis, Phoenix, San Antonio, or Tampa, it’s important to treat your water to reduce the hardness. The best way to do this is by installing a water softener. This type of system removes hardness from the water using a process called ion exchange and requires regular maintenance. With the right treatment, you can ensure your drinking water is safe and of high quality.

Scott Birch is a water filtration installer and designer. He has worked in the industry for many years and is very familiar with and knowledgeable about residential water treatment equipment. Scott enjoys helping people get the most out of their water filtration systems and ensuring that their homes are getting the best possible quality of water.