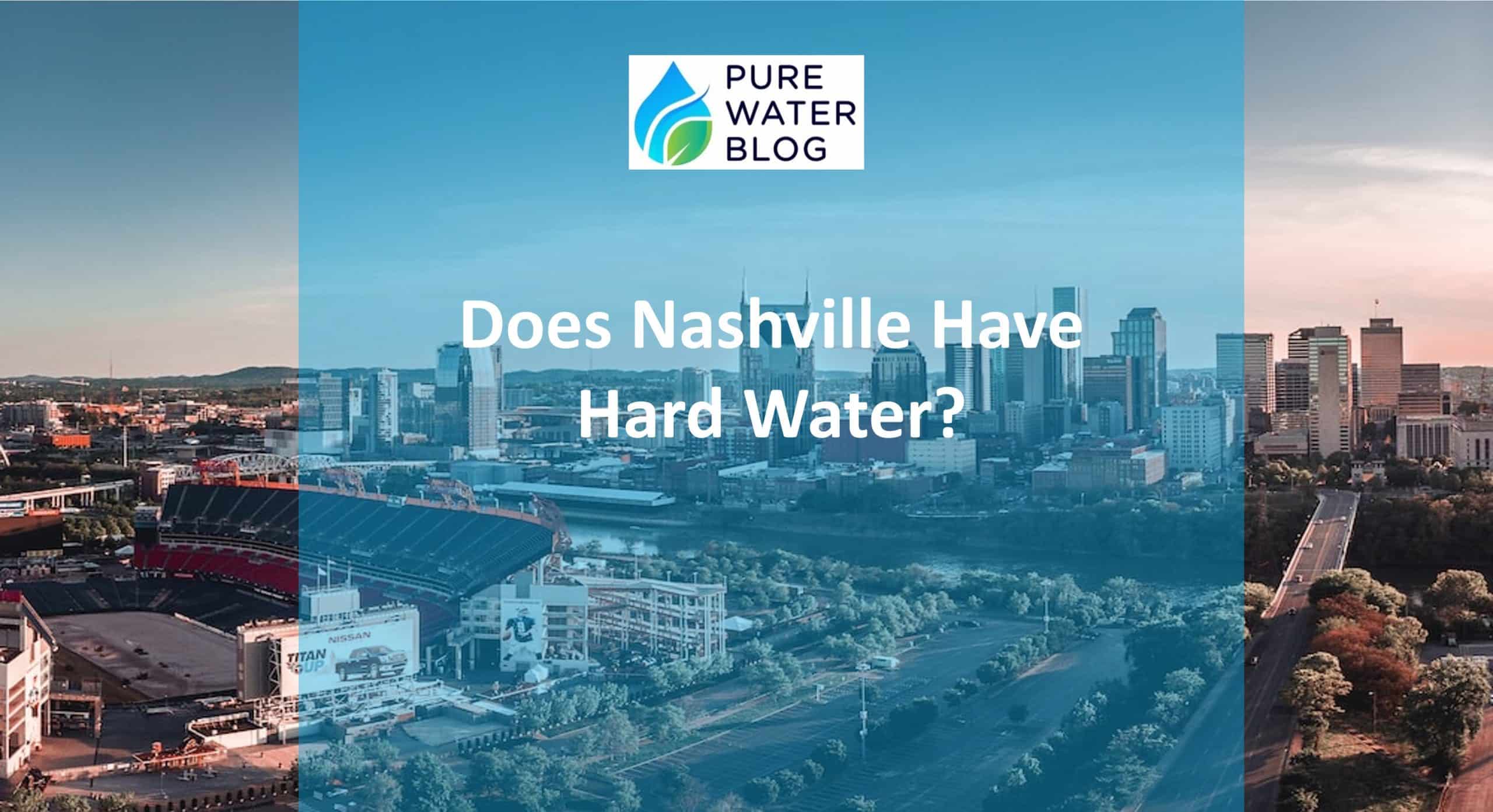 Middle Tennessee is known for its large deposits of limestone in the soil. People who are moving to The Volunteer State have one question on their mind: does Nashville have hard water?

Nashville tap water has an average hardness of 5 grains per gallon which is considered moderately hard. Limestone is the main culprit of hard water and since Nashville happens to be located in central Tennessee, it’s no surprise that it has moderately high levels of water hardness.

So, what does this mean to the people living in these areas? Keep reading to find out.

Yes, the water in Nashville is considered to be moderate on the water hardness scale. On average, this level ranks around 79 milligrams per liter (mg/L) for most Nashville residents.

According to USGS water standards, Nashville water has five grains per gallon of water, which makes it one of the cities with a high level of water hardness.

The reason is that most of the terrain in central Tennessee, including Nashville, is made up primarily of limestone. As a result, the water that flows through the plumbing systems of Nashville carries hard water.

Tennessee water ranges from soft to moderately hard. The average water hardness for the Tennesse resident is around 99 mg/L as calcium carbonate. Nashville, the state capital, has a water hardness concentration of 79 mg/L and Memphis has 55 mg/L.

The table below summarizes the water hardness in Nashville and the major cities and towns in Tennessee.

Why Does Nashville Have Hard Water?

Nashville gets its drinking water from the Cumberland River. This water source flows through areas that have substantial limestone deposits. Limestone is comprised of calcium carbonate which is relatively soluble in water.

As the water winds its way to Nashville homes, it picks up a lot of this mineral. Since calcium is one of the two minerals that are known as hardness, the water becomes quite hard as this process continues.

Where Does Nashville Get Its Water?

There are various sources of drinking water in Tennessee. So, depending on where you live, your water can come from a spring, an underground source, or surface water from streams, lakes, and rivers.

Nashville’s drinking water comes from the Cumberland River, which is rich in limestone deposits. Yet, before reaching residents, it’s treated at two water filtration plants: K.R. Harrington and Omohundro.

What Is Hard Water?

Hard water is what experts call water that contains high levels of dissolved mineral content. The most common are calcium, magnesium, and carbonate minerals.

Tests are carried out annually by the United States Geological Survey (USGS) that determine the hardness level of the water in each US city and are given a score on a scale from less than 75 to over 300 milligrams per liter (mg/L).

Yet, the more commonly used unit is ‘parts per million’ (PPM), which is also the measurement of the amount of chemical compounds found in one unit volume of water.

Water is considered soft if its hardness level is below 75 PPM. if it ranges between 75 and 150 PPM, it’s categorized as moderately hard.

What Are the Effects of Hard Water?

As we mentioned above, Nashville’s drinking water goes through a methodical and exhaustive filtration process before reaching the city’s plumbing system.

So, the good news is that Nashville tap water is safe to drink. In fact, according to the World Health Organization (WHO), drinking hard water may help boost mineral levels, especially magnesium and calcium. We could certainly do more of these minerals as they help build strong bones, support nerve function, and increase energy production.

Now, it’s time to take a look at some of the drawbacks of having hard water.

Dries Out Skin, Hair, and Nails

Because hard water is rich in mineral deposits, it makes it difficult to rinse away soap and shampoo from the surface of your skin and hair. This causes buildup, which is why hard water has been linked to dry skin. It’s also considered a possible cause of eczema outbreaks brought on by dry, irritated skin.

Over time, the buildup of minerals and the soapy residue can give your hair a dull appearance. Plus, it can make your scalp feel itchy and flaky.

Nails are also susceptible to becoming brittle and flaky with sustained use of hard water. This causes the nail bed to dry out, which leads to the stunted growth of the nails.

Another possible impact is that hard water can wreak havoc on plumbing pipes. This is due to the high levels of mineral build-up that corrode and eat away at the pipes, sometimes even clogging them up.

Unfortunately, Nashville residents are in a constant race to keep their pipes and plumbing fixtures regularly maintained and upgraded.

The most common indication of hard water is the gradual buildup of a layer of filmy crust around the kitchen and bathroom faucets. This is because the ingredients in soaps bond with the minerals in the hard water, reducing the soap’s ability to dissolve.

This is what leads to a buildup of layers of curd or film that sticks to everything and causes a ring of soap scum around all the faucets. These deposits of hard water that are left behind once the water dries are called lime scales.

If you remember from your high-school chemistry, calcium reacts with soap, forming ‘soap scum’ as opposed to soap that actually creates a lather. These spots of scum are the water spots you may notice on a glass or dish you just washed.

To remove this residual soap scum, residents are forced to use more detergent and soap to achieve the same level of cleanliness as they would with softer water.

Moreover, hard water can also neutralize the active ingredients in synthetic detergents, making them ineffective. So, you need to switch to a more natural type of laundry detergent made with nontoxic, organic ingredients to get rid of not just the dirt and grime, but also the leftover scum from the minerals in the hard water.

Many people also notice they end up using more soap and shampoos for their baths and showers for exactly this reason.

Can Nashville Water Be Made Softer?

Yes, and there’s only one way to do it: install a water softener. It’s an easy enough job that your local plumber can handle in a couple of hours.

They can also tell you which type best suits your home, such as:

A water softener is the best way to reduce the hardness in your water. If you live in the Nashville area, you can check out this whole house water softener from FilterWater.

So, does Nashville have hard water? Yes!

It may not be as high as other cities around the US, but it’s definitely up there. Luckily, there are ways to make your water softener to avoid the hassle of dealing with soap scum and filmy residue.