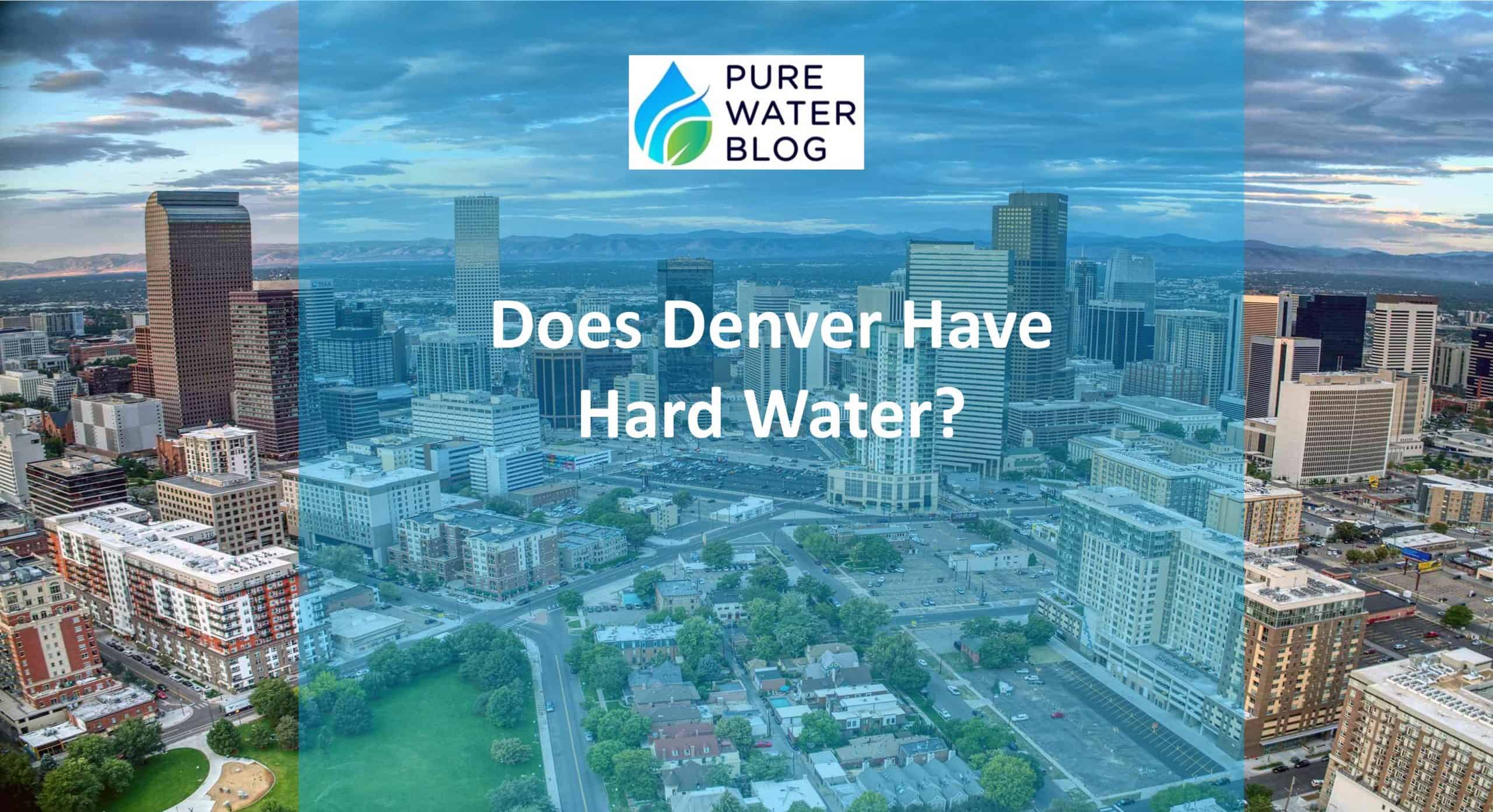 If you live in Denver, you may be wondering if the water is hard in Denver.

Denver’s water is considered to be moderately hard. It has an average hardness of 5.8 grains per gallon. Denver’s water has relatively low hardness because it comes primarily from snowmelt which is very clean. The low levels of hardness are mostly from calcium that the water dissolves from river rocks as it flows down the mountains.

In this article, I review Denver’s water hardness, where the hardness comes from, and some interesting facts about Denver’s drinking water. Keep reading to learn more.

The hardness level of Denver’s tap water is between soft and moderately hard. The average hardness value is 97.5 milligrams per liter (mg/L). However, this depends on the factors like the snowmelt, physical environment and the season.

So, which is the exact hardness level of Denver’s tap water according to the official site of Denver water?

In addition, Steve Price, a Water Treatment Technician at Denver Water organization, said that Denver’s water hardens a bit in the winter, when channels and reservoirs freeze, allowing the water to retain more minerals.

Changes in the hardness of water because of changing seasons and temperatures are more than likely to happen and it is not something unusual.

In addition to this, some people prefer to invest in water filters to make the tap water softener so that they can enjoy healthier water all year round. However, this is not the best option that people should only care for, because they can still drink salt and minerals in their water.

The hardness level of Colorado’s tap water apart from the locations individually is considered soft to moderately hard. In winter, the water in Colorado gets a bit harder. This happens because the reservoir freezes, allowing the water to hold more minerals.

According to HydroFlow-USA, Pueblo City has the hardest recorded water in the state with 181 PPM, and another city with moderately hard water is Westminster with 117 PPM. Colorado’s most populous city, Denver, has relatively soft water at 72 PPM.

The table below summarizes the water hardness in Denver and the major cities and towns in Colorado.

What is Hard Water?

Before getting into the deepest, it is important to understand what hard water is and what we mean by this term.

Hard water is water that includes high mineral content. The minerals can come from natural sources, such as the soil and rocks around the water source, or human-made sources such as a well.

There are two types of hard water: temporary and permanent.

On the other hand, permanent hard water is caused by natural geological conditions that make it difficult to remove calcium and magnesium from the source water.

What are the problems of hard water?

It is generally accepted that hard water is not the best thing when it comes to our health and way of life. Minerals in hard water can lead to several problems that we are going to mention below.

The most common problems with hard water are:

Who is Denver’s water provider?

Denver Water was established in 1918. It has been providing the people of Denver with clean, safe and high-quality drinking water ever since.

Denver Water is Denver’s water provider. It is a public organisation which is funded by water tariffs and new water tap fees, but not by taxes. It is the oldest and largest water system in Colorado. that provides water to the city and surrounding areas.

It serves 1.5 million people in the metro area and includes residents of Denver, parts of Adams County and other communities in the South Platte River Basin (SPRB).

Denver Water also manages more than 2,000 miles of pipeline and provides wastewater service for about half a million people in the same region.

Where does Denver water come from?

Much of Denver’s tap water comes from local snowfall. The water in Denver according to the official site of denverwater.org comes from these two sources:

Denver’s water mainly comes from the South Platte River and the Colorado River. The two rivers are responsible for bringing the majority of water to Denver and Colorado residents in general.

Denver Water organization collects about 50% of its drinking water from the tributaries of the Colorado River on the western side of the Continental Divide.

The remainder of the utility’s drinking water which is the other 50% is from the South Platte River Basin on the eastern side of the Continental Divide. Denver Water uses approximately 2% of the water used in the state to provide for approximately 25% of Colorado’s population.

It is also important to mention that water consumption is highly dependent on the weather of the year. An interesting fact about water consumption in Denver is that almost half of a single-family home’s water use is outdoors, and hot, dry years mean customers use more water than usual.

Denver Water serves about a quarter of the state’s population, yet Colorado uses less than 2% of its total water, both treated and untreated.

Denver’s water is the cleanest and the best in the country. The city has been ranked first for its quality of drinking water by America’s Best Water and Wastewater Systems, an independent research organization that ranks municipal systems nationwide every year.

However, apart from its rankings and awards, there are many things that people should focus on before deciding to drink water straight from the tap (even if it is safe to drink) because is not as pure as it seems.

The pinnacle contaminants in Denver’s tap water are Haloacetic acids (HAA5 & HAA9) and trihalomethanes (TTHMs), which can also additionally probably be cancerous to people. However, those contaminants fall under the criminal restriction set with the aid of using the EPA.

A not unusual issue of Denver citizens is the presence of Cryptosporidium (crypto) and giardia from byproducts of inflamed animals withinside the Rocky Mountain region. However, checking out has now no longer located lines of those parasites withinside the ingesting water.

There can be hint quantities of lead detected in your tap water, even though this doesn’t come from the water itself. Lead leaches into water thru pipes and furnishings in older houses and privately owned properties.

How much water Denver receives each year?

When it comes to Denver’s capacity water each year, it is relatively low when compared to most cities across the United States. The reason is that Colorado belongs to the mid-west of the country which is the part that receives the lowest water percentages each year including some other western states.

In an average year, Denver brings about 290,000 acres that include rain and snowmelt into the supply system. That’s about 94 billion gallons of water.

Considering the population of Denver, 290,000 acres of water is quite low for the needs of its residents. Most of the spring water comes from the mountain when the snow melts, so the water is stored in mountain reservoirs until it is needed.

Colorado water use and consumption in statistics

After analyzing Denver’s water, it is time to mention Colorado’s water use which is the state of Denver to see if there are any differentiations in water use.

Colorado water use is usually divided into two major categories: consumptive and non-consumptive.

Consumptive water is water that cannot be reused, recycled or used for essential purposes. For example, the water that we use to drink, water plants, and cook.

On the other hand, non-consumptive water is water that can be reusable or recycled by saving water. For example, the water we use to wash dishes or take a bath belongs to the category of non-consumptive.

According to waterknowledge of Colorado State, the first category that most people consume the most water is agriculture with 86.7%.

Municipal and Industrial uses come second with 6.7% of the statewide annual water delivery. Non-consumptive comes third with 5.5% and self-supplied industrial is fourth with just 1.1%.

What Can I Do About Hardness in My Water

If you have hard water, there are several ways to reduce the amount of minerals in your water.

The best option is to install a whole-house water softener system. This system filters out the calcium and other minerals, leaving you with softer and cleaner water.

Water softeners are designed to remove calcium and magnesium from the water supply. They use an ion exchange resin to reduce hardness. The resin is periodically regenerated with a brine solution.

A water softener is the best way to reduce the hardness in your water. If you live in the Denver area, you can check out this whole house water softener from FilterWater.

Reverse osmosis is a water treatment method that removes a wide range of contaminants. It also reduces the level of hardness.

However, RO is not generally the best way to remove hardness because the calcium and magnesium ions can foul the membrane and pre-filters. This results in increased maintenance, higher costs, and reduced efficiency.

Another option is buying bottled or filtered water. Bottled water goes through an extensive filtration process to ensure it is safe to drink. Filtered water can be used in place of tap water for drinking and cooking.

This option does not address the issue of scale buildup in your plumbing or damage to your water using appliances.

The most important information and details about Denver’s water like the hardness of the water, the provider and how the residents of Colorado and Denver get water. As we mentioned above, the most water consumption for Colorado State goes to agriculture which means that people care and invest in nature and the environment. We hope that you found our article useful and informative.