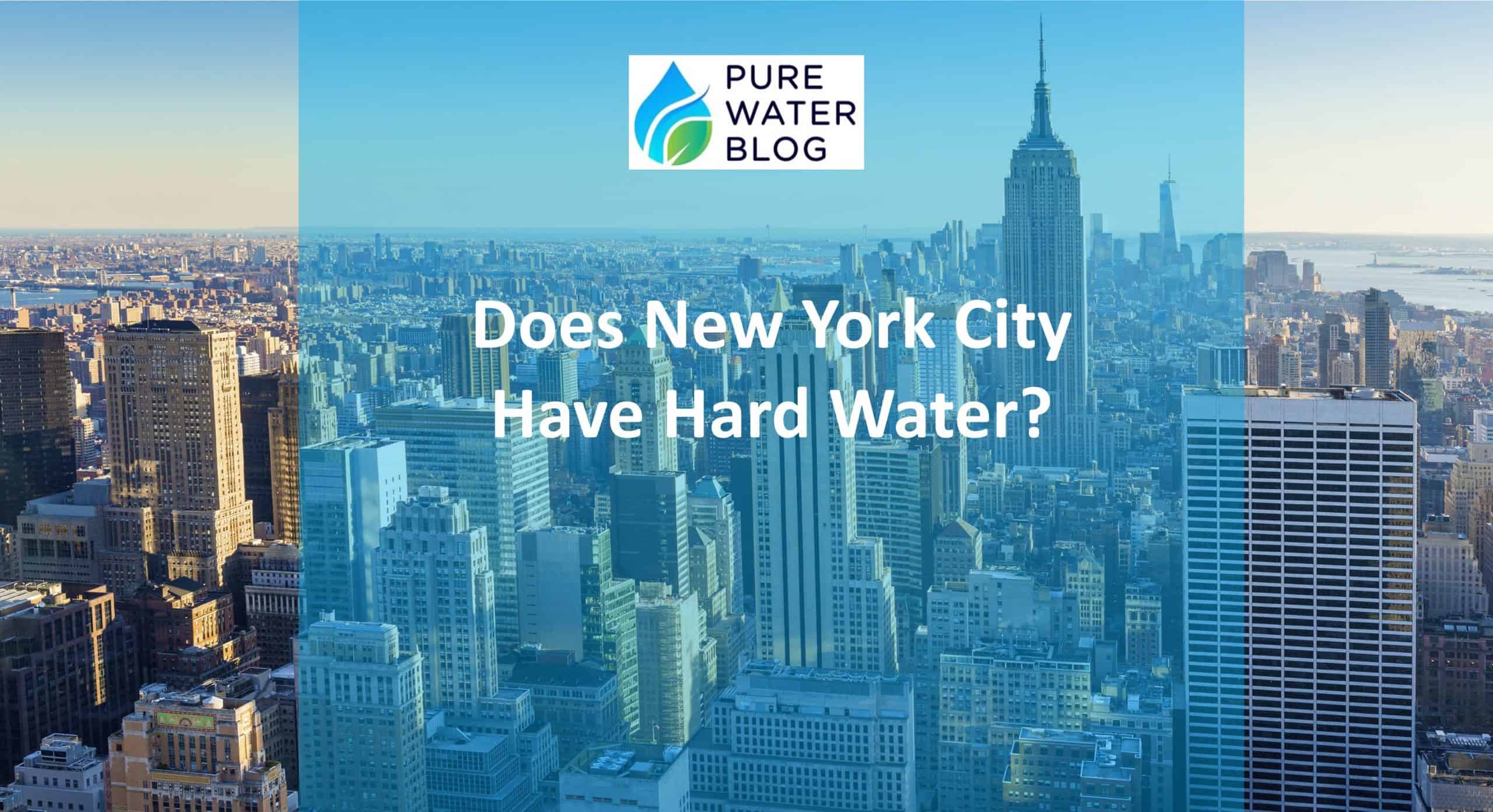 Many people are concerned about the quality of their drinking water, and for good reason. Every day there are reports of contamination in our drinking water supply. If you live in New York, you may be asking – Does New York City have hard water?

New York water ranges from soft to moderately hard, depending on which water source is being used. The average water hardness for the city is 65 ppm which is the same as 4 grains per gallon. This places the water in the moderately hard category.

Most of the water that ends up in New York’s tap water comes from precipitation. Rainwater is naturally free of hardness, and the water picks up very little minerals as it flows through the watersheds that supply water to the City.

The table below summarizes the water hardness in New York City and the major cities and towns in the State of New York.

Learn about water hardness in these cities:

On average, New York’s water hardness is moderately hard at 62 ppm. The water in New York City and its surrounding areas is considered to be of medium hardness. However, the water hardness can vary from area to area and even from one water source to another.

Why Is New York Water Hard?

New York water varies from soft to moderately hard. It varies because the city varies the percentage of water that it gets from each of its primary water sources.

The majority of water that the city collects comes from precipitation which is naturally free of calcium and magnesium.

The city gets the majority of its drinking water from two sources. The table below provides the water supply and the hardness of the water from the supply for New York City.

Where Does New York Water Come from?

New York City’s tap water comes from 19 reservoirs and three lakes spread across a 2,000-square-mile watershed. The watershed is located in the Hudson Valley and Catskill Mountains, as far north as 125 miles from New York City.

Currently, New York gets very little of its water from the groundwater supply system.

Who Provides Water to New York

What type of treatment is used to purify New York water?

New York City does not filter its drinking water. This is because water naturally flows from rain to the surface and then through pathways to rivers.

The water in NYC is purified with chlorine, fluoride, orthophosphate, sodium hydroxide, and ultraviolet light.

Chlorine is used to disinfect the water and make it safe to drink. Ultraviolet light is used as a supplemental disinfectant to kill giardia and cryptosporidium which are resistant to chlorine treatment.

In addition to disinfection, fluoride is added to help prevent tooth decay. Orthophosphate and sodium hydroxide are used to keep lead, copper, and other metals from leaching out of the century-old water pipes in the city.

Hard water is safe to drink, but it can cause problems with plumbing, appliances and fixtures. Hard water also makes it difficult to rinse soap from dishes and clothes, resulting in a sticky residue that is difficult to remove. Hard water can also reduce the effectiveness of soaps and detergents, reducing their cleaning power.

What is water hardness?

Hardness is a measure of the amount of calcium and magnesium in water. The higher the level, the harder your water is considered. Hardness levels can range from 0 to over 500 parts per million (ppm).

Hard water is safe to drink. Many people like the taste of hard water because it is mineral-rich. But, hard water can cause problems in plumbing fixtures and appliances, reduce the effectiveness of soaps, detergents and shampoos, and result in scale buildup on pipes and fixtures.

What can you do about hard water?

If you have hard water, you have a few options. The first is to install water softening equipment, such as an ion exchange filter or reverse osmosis system. These systems remove calcium and magnesium from the water and replace them with sodium.

If your water is moderately hard, like New York’s, then you can use a reverse osmosis system. An RO system can reduce hardness, as well as other contaminants, like lead and chlorine.

A water softener is the best way to reduce the hardness in your water. If you live in the New York City area, you can check out this whole house water softener from FilterWater.

New York City’s tap water is considered to be safe. Every year, the Department of Environmental Protection conducts 500,000 to 600,000 health and quality tests on NYC’s water. The test results are available to the public.

New York City has moderately hard water. While it is safe to drink, the hardness can cause problems with plumbing and fixtures, and reduce the effectiveness of soaps and detergents. Installing a water softener or reverse osmosis system can help if you are bothered by the hardness of your city’s tap water.

link to Does Boiling Hard Water Make It Soft?

Hard water presents its fair share of problems. If you’re wondering how to make it soft, and if boiling it will do the trick, you may be pleasantly surprised! Hard water is non-lather-forming water...

Everyone wants purified and clean accessible water available, day or night, in their home. If you live in a hard water area, you may be tempted to try a filter to eradicate this problem. Hard water...