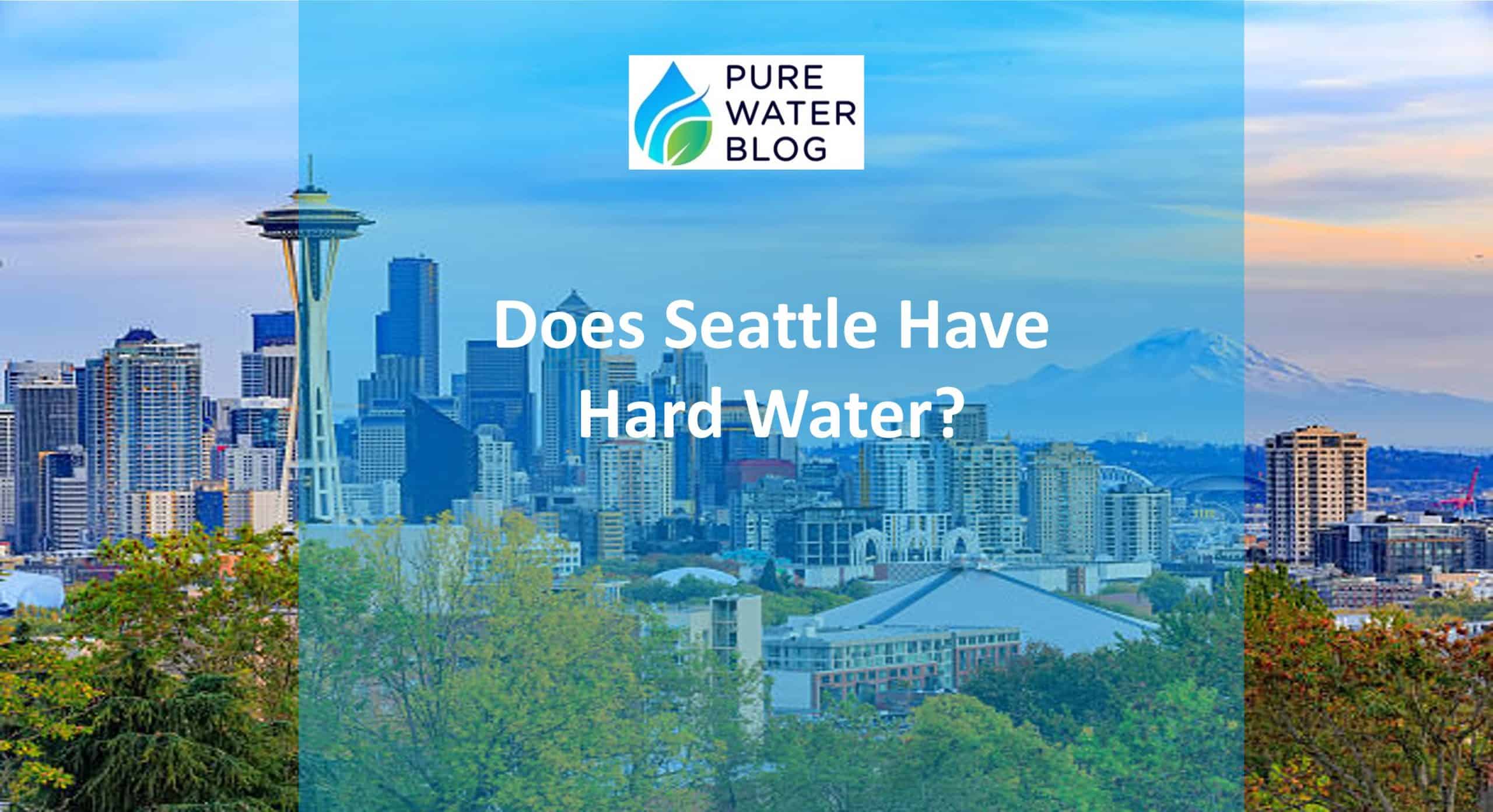 Seattle’s water is fluoridated, treated, and safe for consumption. Some people even enjoy the taste of tap water in the metropolitan area!

Given how safe and delicious the city’s water is, many people wonder: does Seattle have hard water?

The average water hardness in Seattle is 1.4 grains per gallon and 21.5 milligrams per liter as calcium carbonate. Compared to a lot of other U.S. cities, Seattle’s water is rather soft, thanks to the snowmelt water supplies from the Cascade mountains.

Where exactly does Seattle get its water, what hardness levels can you expect, and what does this all mean for you? Let’s find out!

When we say hardness, we’re referring to the minerals (like calcium and magnesium) dissolved in the water. We can measure this value in grains per gallon (gpg), milligrams per liter (mg/L), or parts per million (ppm).

Higher numbers mean that the water is hard, doesn’t lather as well, and is harsh on the skin. However, it can be good for the heart in the long term if used for drinking.

This doesn’t seem to be the case in the Emerald City.

According to the Seattle Public Utilities (SPU) report for the third quarter of 2022, the water hardness in the city is 1.29-1.54 gpg. The same report estimated the area’s calcium carbonate hardness at 21-21.9 mg/L.

Going by the standards set by the U.S. Geological Survey (USGS), we can say that the water in Seattle is soft since it falls into the range of 0-60 mg/L. Meanwhile, the Water Quality Association (WQA) would consider Seattle’s water hard.

So, it depends on which guidelines you’re following.

Plus, not all places in Seattle receive the same supply. You can expect different estimates based on where you are and whether you get your water from the Cedar or the Tolt, but we’ll get to that in a minute!

Washington Water Hardness – How Hard Is It?

In general, Washington has soft to moderately hard water. The average water hardness, expressed as calcium carbonate, varies between 12 mg/L (considered to be soft) and 218 mg/L (hard water).

Cities that have soft water include Seattle (21.5 mg/L) and Everett (12 mg/L). Cities with hard water are mostly located in the eastern part of Washington. These include Spokane at 218 mg/L and Walla Walla at 178 mg/L.

Washington state gets its drinking water from three main sources:

People who drink tap water in Seatle are fortunate to have clean, soft city tap water.

The table below summarizes the water hardness in Seattle and the major cities and towns in Washington.

Why Does Seattle Have Relatively Soft Water?

Now we know that different associations can consider Seattle’s water as hard or soft. However, most people would just say that it’s relatively soft compared to other U.S. cities.

Normally, rainwater is on the soft side. However, as it makes its way through the ground and into pipelines, it picks up minerals. As a result, around 85% of the water supply in the U.S. is hard.

So, why does this not apply to the water in Seattle?

Well, to answer this, we have to look at the area’s geography. Seattle’s coastal location means it has better odds of receiving a steady supply from sources with soft water.

Where Does Seattle Get Its Water?

We compiled the following information about drinking water sources that Seattle has.

Just like many other places in Washington, the greater Seattle area relies on the Cascade mountains for its municipal water supply.

Each spring, the layers of snow (snowpack) in the Cascades melt and flow down to fill watersheds like the Tolt and the Cedar. From there, the water is treated, stored in reservoirs, and pumped to pipelines across the metropolitan area.

Let’s take a closer look at each water source and its hardness levels.

The South Fork Tolt is a 12,500-acre reservoir that fills up with the creeks and streams coming from the Cascades.

The Tolt River provides about 100 million gallons daily, which adds up to about 30% of the city’s drinking water supply. If you’re in the northern parts of Seattle, odds are, that’s your main water supply.

From the Tolt dam, the water goes to a regulating basin for sedimentation and filtration before it’s treated.

All in all, the Tolt River Watershed has a low average calcium carbonate hardness level of only 1.2 gpg.

Just like how the flow from the Cascade mountains fills up the Tolt reservoir, it also fills up the Chester Morse Lake and the Masonry Pool reservoir.

However, the Cedar River Watershed is located a bit south of the Tolt River Watershed. So, it doesn’t serve as much of the northern areas as the Tolt.

Just don’t let that fool you into underestimating the Cedar River Watershed’s importance. It provides about 70% of the drinking water supply to the people in the greater Seattle area!

Plus, the majority of the 90,638-acre land is owned by the government. This means contamination levels are much easier to monitor and control. Yet, the water is still screened and treated, anyway.

With an average calcium carbonate hardness of 1.4-1.6 gpg, the Cedar is a little harder than the Tolt. However, it’s still relatively soft. This gives the city drinking water that is consistently pure and reliable.

While the Cedar and the Tolt are the two primary water sources in Seattle, there are a few underground wells worth noting.

For instance, the celebrated Lynnwood artesian well gets its supply from an aquifer over 120 feet deep. People in the Seattle metropolitan area take pride in how pristine this well’s water is and how it hasn’t failed even a single water quality test in 60 years!

That said, the water in Lynnwood’s well isn’t as soft as the Cedar or the Tolt.

The latest inorganic compound report in 2022 puts the calcium carbonate hardness at 72.3 mg/L. So, it’s moderately hard by the USGS standards.

However, this artesian well doesn’t flow directly into the municipal water supply. Instead, people have to go and pump out the water themselves to bring it back home. That means that its hardness doesn’t affect the average estimates for Seattle.

As we discussed, Seattle water hardness is quite low.

What is Hard Water?

Before getting into the deepest, it is important to understand what hard water is and what we mean by this term.

Hard water is water that includes high mineral content. The minerals can come from natural sources, such as the soil and rocks around the water source, or human-made sources such as a well.

There are two types of hard water: temporary and permanent.

On the other hand, permanent hard water is caused by natural geological conditions that make it difficult to remove calcium and magnesium from the source water.

What are the problems of hard water?

It is generally accepted that hard water is not the best thing when it comes to our health and way of life. Minerals in hard water can lead to several problems that we are going to mention below.

The most common problems with hard water are:

Hard water is defined as water that has minerals in it – specifically calcium and magnesium.

What Can I Do About Hardness in My Water

If you have hard water, there are several ways to reduce the amount of minerals in your water.

The best option is to install a whole-house water softener system. This system filters out the calcium and other minerals, leaving you with softer and cleaner water.

Water softeners are designed to remove calcium and magnesium from the water supply. They use an ion exchange resin to reduce hardness. The resin is periodically regenerated with a brine solution.

Reverse osmosis is a water treatment method that removes a wide range of contaminants. It also reduces the level of hardness.

However, RO is not generally the best way to remove hardness because the calcium and magnesium ions can foul the membrane and pre-filters. This results in increased maintenance, higher costs, and reduced efficiency.

Another option is buying bottled or filtered water. Bottled water goes through an extensive filtration process to ensure it is safe to drink. Filtered water can be used in place of tap water for drinking and cooking.

This option does not address the issue of scale buildup in your plumbing or damage to your water using appliances.

Overall, Washington ranks low on the water hardness levels nationwide, and Seattle is no exception. Seattle’s water hardness ranges between 1.29 and 1.54 gpg.

Although the Cedar has higher calcium carbonate hardness and contributes more to Seattle’s water supply than the Tolt, the water in the area is still considered soft.

As a result, you’ll get to enjoy better cleaning capabilities from tap water without annoying soap scum, calcium deposits, or mineral stains!