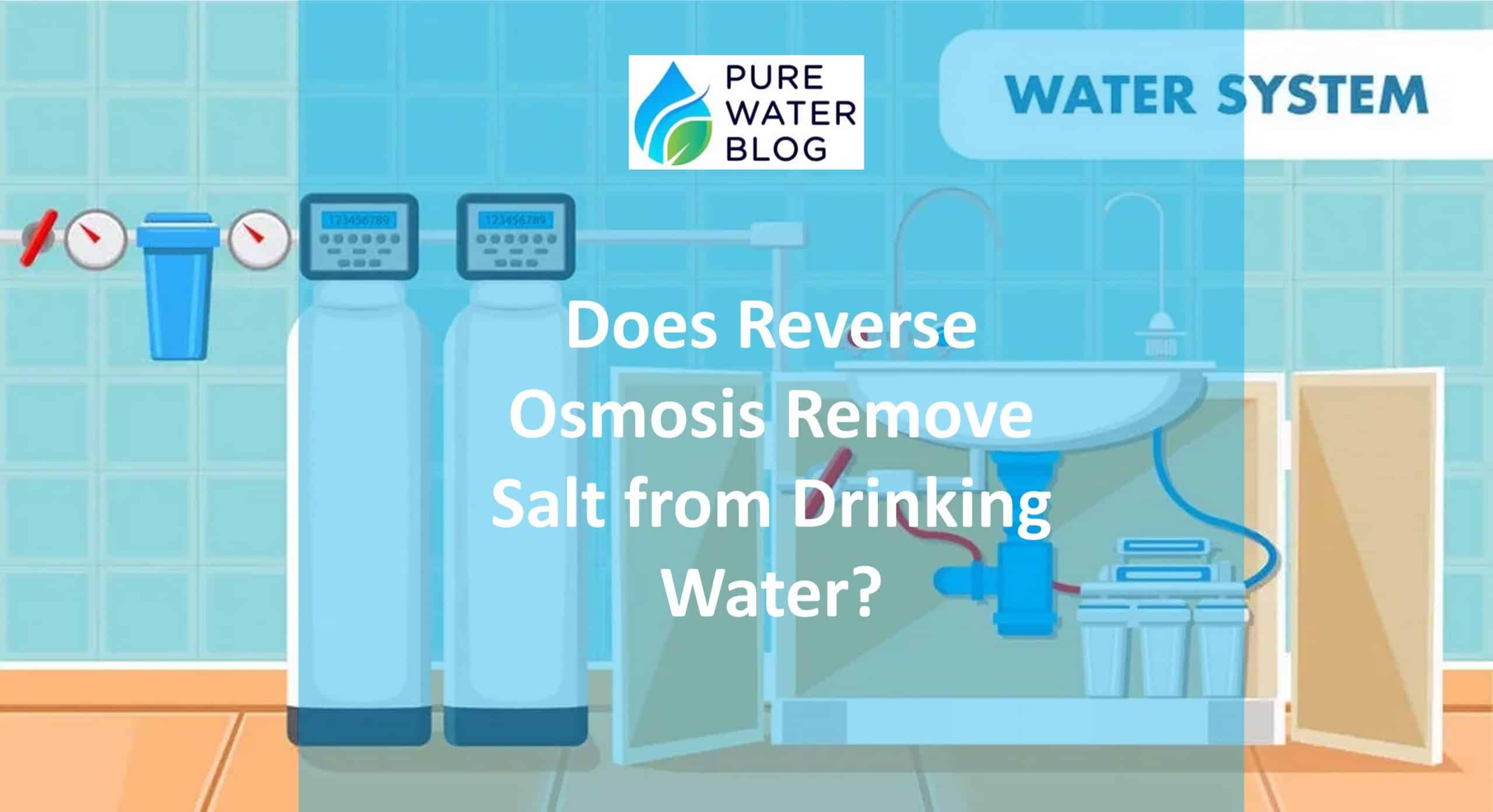 Salt is a necessary mineral that our bodies need in order to function properly. It is found in many foods that we eat, and it is also present in our drinking water. While salt is beneficial in small amounts, too much of it can be harmful to our health.

How Does Salt Get into My Drinking Water 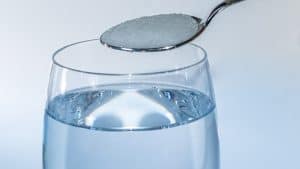 Sodium is the sixth most abundant element on Earth, and there are significant deposits of sodium-containing minerals found throughout the world. Sodium salts are very soluble which is why sodium is present in almost all drinking water.

The main way salt gets into water is when it flows underground and dissolves salt from the earth. Groundwater typically has higher mineral and salt content than surface water.

If the water moves slowly or flows through a lot of salt deposits, then the water will have more salt in it. Public water supplies generally don’t salty water because the utilities install the wells in areas where there is very little or no salt.

Another way salt gets into drinking water is from road salts that are used to clear snow and ice. When these salts dissolve in the melted snow and ice, the salty water infiltrates into the ground where it can increase the salinity of the aquifer.

If you have a water softener in your home, it can also add salt to your drinking water. Water softeners work by exchanging the minerals in hard water for sodium. This process increases the level of salt in your water.

It’s important to note that water softeners don’t add a lot of sodium to your water. In fact, the level of sodium in water from a water softener is still lower than the maximum level that’s recommended by the Environmental Protection Agency (EPA).

Concerns Over Salt in Drinking Water

While a small amount of salt in your drinking water is not a concern, too much salt can be harmful to your health. There is no federal drinking water standard for sodium. Many state health agencies recommend 20 milligrams per liter (mg/L) for people on restricted sodium diets. People on moderately restricted sodium diets are advised to drink water with no more than 270 mg/L of sodium. 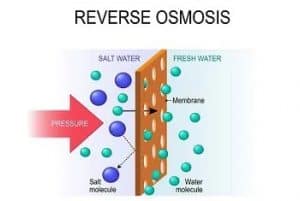 A typical RO system designed for residential use can remove 99% or more of the salt in water. Some units have even higher removal rates.

Reverse osmosis works by forcing water through a semi-permeable membrane. The pores in the membrane are small enough to allow water molecules to pass through, but they are too small for salt molecules. This process concentrates the salt on one side of the membrane in a solution known as brine and allows the purified water to pass through where it is collected and used for drinking. The brine waste is discharged from the system.

Reverse osmosis removes salt from water very effectively. Most RO systems sold for use in homes can remove 99% of the salt and other minerals in drinking water. Some units can remove as much as 99.99% of the salt!

While most reverse osmosis systems are very effective at removing salt from water, there are a few things to keep in mind. First, RO systems require regular 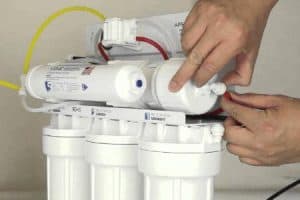 If you’re concerned about the amount of salt in your drinking water, reverse osmosis is a great option. Not only does it remove salt, but RO systems can also remove other contaminants that may also be present in your water.

Some of the contaminants that reverse osmosis can treat include:

Should You Use Both Reverse Osmosis and a Water Softener 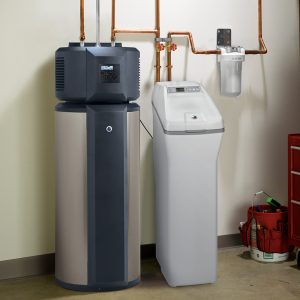 One benefit of having both a water softener and a reverse osmosis system is that they complement each other.

For example, one concern people with water softeners has is that the regeneration process adds sodium to their water. This isn’t a big problem for most people because water softeners don’t increase the sodium content of water to unsafe levels. However, if you’re on a restricted sodium diet, it may be something to consider. (Read my article on this subject here.)

If you have hard water, a reverse osmosis system can become fouled with the scale buildup. You’ll notice that the sediment filter plugs up faster than normal, resulting in more frequent replacements. The same thing happens to the carbon filter.

The RO membrane is especially susceptible to fouling from hard water. The calcium and magnesium deposits accumulate in the tiny pores, leading to a decrease in water production and eventually, the system will fail.

A water softener placed before the RO system will remove the hardness from the water, thereby extending the life of your reverse osmosis system. And that’s not all – you’ll also see an increase in efficiency and performance!

Installing a reverse osmosis system downstream from your water softener can help remove any residual salt that’s added to your water during the regeneration process. This can give you an extra level of protection.

Combined benefits of having both

In addition to the benefits mentioned above, combining both the water softener and reverse osmosis filter offers additional benefits. The RO filter removes many impurities besides salt and sodium.

If you are concerned about lead, pesticides, arsenic, or any other contaminants in your drinking water, the RO filter will remove them.

So, if you’re looking for the ultimate in drinking water protection, combining a water softener with an RO system is the way to go! Not only will you extend the life of your RO system, but you’ll also have the peace of mind that comes from knowing your drinking water is as pure as it can be.

Other Ways to Remove Salt from My Water

In addition to reverse osmosis, there are other technologies that can be used to remove salt from water. These options are discussed below.

A distillation system can remove salt from your drinking water. This technology works by heating water to the boiling point. The steam that’s produced is then condensed and collected, leaving behind any impurities, including salt.

The main downside of a distillation system is that it uses a lot of energy – at least on a per gallon basis. In addition, it can be slow, taking up to 24 hours to produce a gallon of distilled water.

Despite these drawbacks, distillation is very effective at removing salt from your water.

If the source of salt in your water is your water softener, you can address this problem by switching to a salt-free water softener. These systems use a variety of technologies to remove hardness from your water without the use of salt.

Some of these systems use magnetic fields to descale your pipes and fixtures, while others use a process called ion-exchange to remove hardness minerals from your water.

I wrote an article on salt-free water softeners that is a great resource.

Reverse osmosis is a very effective method to remove salt from your softened water. RO can remove 99% or more of the sodium and other minerals in drinking water. It is considered a benchmark technology for salt reduction.

I have a water softener – Do I need to add reverse osmosis?

Does a carbon filter remove salt?

Activated carbon does not remove salt from water. Carbon filters are designed to remove chlorine, taste, and odor from your water. They are not effective at removing minerals, including salt.

Does a water softener remove salt from drinking water?

Water softeners remove hardness (calcium and magnesium) from water, but these systems do not remove salt. In fact, most water softeners use salt to regenerate the resin after it becomes saturated with hardness, and a small amount of sodium is added to your water during this process.

Reverse osmosis is an effective way to remove salt from your drinking water. This technology can remove 99% or more of the sodium and other minerals in your water. If you’re concerned about the level of salt in your drinking water, installing an RO system is a great way to reduce it.

There are other options for removing salt from your water, including distillation and salt-free water softeners. Each of these options has its own set of pros and cons that you’ll need to consider before making a decision.

If you have any further questions about removing salt from your drinking water, please feel free to leave a comment below. I’m always happy to help.

Heavy metals are a growing concern for homeowners across the country. These contaminants can cause serious health problems if they are ingested in high levels. So, does reverse osmosis remove heavy...

Continue Reading
link to Can Water Be Too Soft? Homeowner's Guide to Hard Water

If you have a water softener, then you may be wondering if it is possible for your water to be too soft. Water hardness is a measure of how much calcium and magnesium are dissolved in water. Soft...