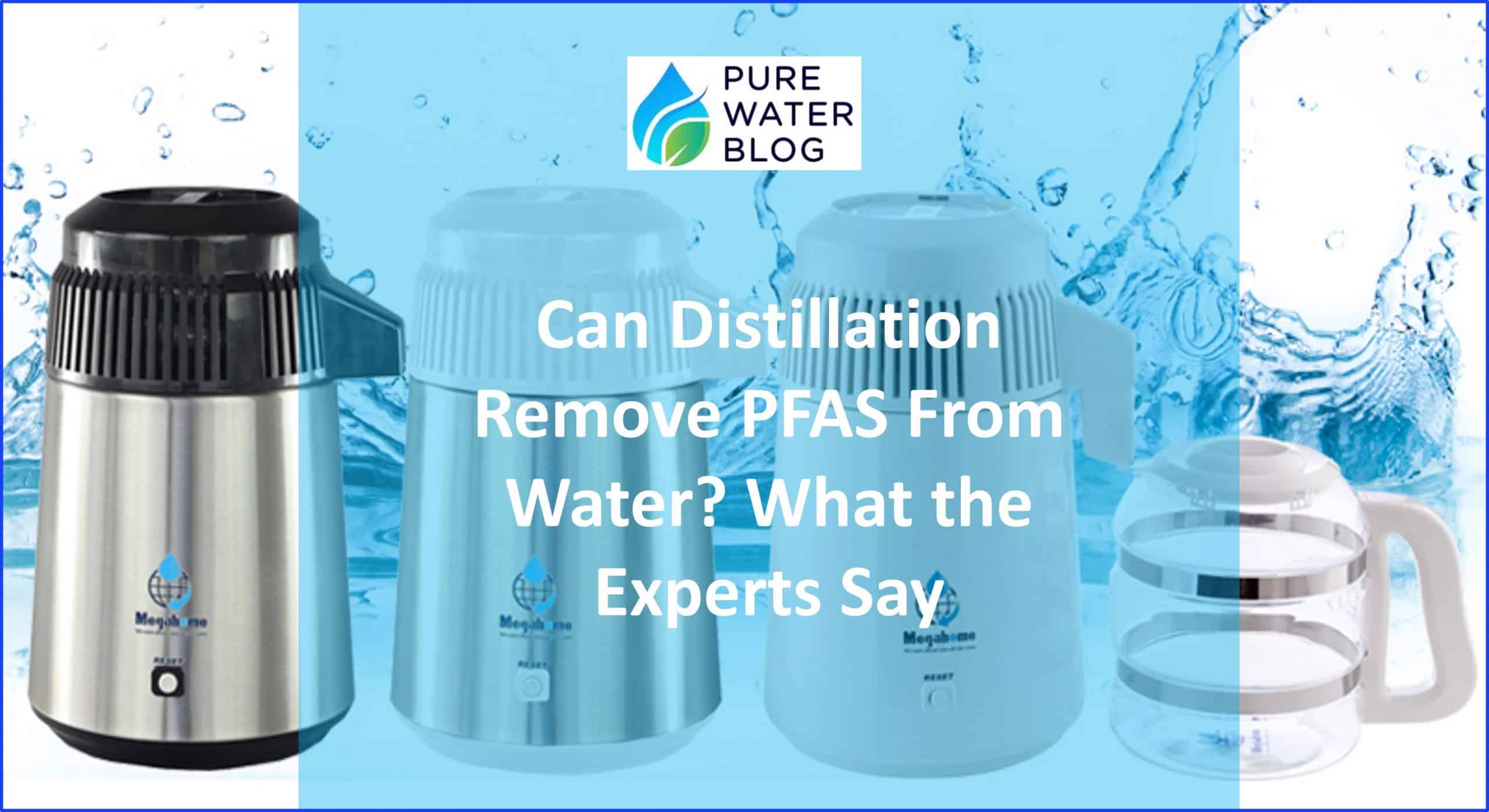 PFAS contamination is a growing concern for homeowners across the country. These chemicals have been linked to a variety of health problems, so it’s important to know how to remove them from your drinking water.

In this blog post, we’ll explore the question of whether distillation can remove PFAS from water. We’ll also look at some of the latest research on this topic and provide some tips for keeping your family safe from these harmful chemicals.

PFAS are a group of chemicals that have been linked to a variety of health problems, including cancer, developmental issues, and immune system disorders. These chemicals are found in a variety of products, including non-stick cookware, food packaging, and stain-resistant fabrics. They can also be found in some water supplies.

PFAS are very stable and don’t break down easily in the environment. They can build up in your body over time, and even low levels of exposure can be harmful. This is why they are known as “forever chemicals.”

Read my comprehensive article on PFAS.

PFAS is an acronym that stands for per- and polyfluoroalkyl substances. These are a group of man-made chemicals that includes more than 4,000 different compounds. They are used to make other chemicals and in a variety of industrial and commercial applications

PFAS are very stable and don’t break down easily in the environment. They can build up in your body over time, and even low levels of exposure can be harmful. This is why they are known as “forever chemicals.”

There are a variety of health risks associated with PFAS exposure. These include:

A growing body of evidence suggests that even low levels of exposure to PFAS can be harmful. This is why it’s important to remove these chemicals from your drinking water.

Read what the FDA says about the health effects of PFAS.

How does PFAS get in my water

PFAS can enter the environment through a variety of means. They can be released into the air, soil, and water during manufacturing processes or when products that contain PFAS are used.

PFAS can also enter the environment through wastewater discharge. For example, some sewage treatment plants are not able to remove all of these chemicals from effluent before it is released into the environment.

PFAS can also enter drinking water through leaching from landfills, sewage sludge, or biosolids that have been applied to agricultural fields.

The US Environmental Protection Agency (EPA) has set a drinking water advisory level for two types of PFAS:

These are the levels at which the EPA believes there is a risk to human health. However, it’s important to note that these levels are not enforceable standards.

Distillation is a water treatment process that involves heating water to its boiling point and then collecting the resulting vapor. This vapor is condensed back into water, leaving behind impurities like PFAS. It is a very effective treatment method for many contaminants.

Distillation systems work by boiling water in one chamber until it turns to steam. This steam is then cooled and collected in another chamber. It leaves all of the contaminants with a boiling point higher than water behind.

Distillation is very effective for removing lead, arsenic, fluoride, and viruses from water. However, it does not remove contaminants whose boiling point is equal to or less than water, like benzene.

Some units have gas vents to eliminate volatile organic compounds with low boiling temperatures from carrying over to the condensation chamber. This allows them to remove VOCs from water without it contaminating the purified water.

Most residential distillation units are point-of-use (POU) devices. This means they only treat the water where it is used – such as in your kitchen – where they can purify water used for drinking and cooking.

Distillation system sizes vary – most can produce 3 to 11 gallons of purified water per day.

Does Distilled Water Have PFAS in It

Distillation systems are very effective at removing PFAS from drinking water. This is because PFAS compounds are not volatile (i.e., they boil at higher temperatures than water). Water can boil and evaporate, leaving these contaminants behind.

How much PFAS can distillation remove

Laboratory testing indicates that distillation can remove more than 99% of PFAS from water. Many units are capable of removing 99.99% of PFAS.

Problems with distillation and PFAS

Distillation units have problems with hard water. Calcium and magnesium will form a scale at the bottom of the boiling chamber. Eventually, this scale must be removed, either by scrubbing with a stiff brush or by rinsing with a mild acid.

The contaminants that do not evaporate are left behind in a concentrated waste solution. This liquid waste must be disposed of to prevent it from contaminating the environment.

Want to learn more? Read my article about other treatment methods that can remove PFAS.

Factors to Consider with Distillation

To produce steam, energy is required. Consequently, the operating costs for distillation units are most often more expensive than those required for other home water treatments.

The purchase price of distillation units is also high. The cost for a residential distiller can range from $320 to $2,500.

As with all home water treatment systems there is some level of regular maintenance that needs to be carried out on a unit in order for it operate properly. Unevaporated pollutants left behind after boiling must be disposed of by flushing them to the sewer or septic system.

NSF International is a third-party testing organization that verifies the claims made by manufacturers. They have a standard specifically for distillation units – NSF/ANSI 62-2017.

The primary purpose of this standard is to ensure that point-of-use and point-of entry drinking water distillation systems meet specific requirements in terms of materials, design, construction and performance.

Look for NSF certification when shopping for a distillation unit. This will give you assurance that the unit has been tested and certified by a reputable organization.

Distillation is a very effective way to remove PFAS from drinking water. It is possible to remove 99% or more of these forever chemicals from your water.

However, this treatment method has some drawbacks. The main ones are the high cost of purchase and operation, as well as the need for regular maintenance.

NSF certification is important when shopping for a distillation unit. This will give you assurance that the unit has been tested and certified by a reputable organization.

Richard Boch is a chemical engineer responsible for designing water filtration systems for industrial and residential customers. He has more than 20 years of experience with ion exchange, activated carbon, and reverse osmosis. Richard's expertise has made him a go-to source for municipalities and businesses looking to improve their water quality. When he's not working, Richard enjoys spending time with his wife and two young children. You can also follow him on Twitter and Facebook.

link to Why Does My RO Water Smell?

Reverse Osmosis (RO) is one of the most widely used methods for purifying contaminated water. RO treated water is always pure, odorless, and tasteless. So, when your water starts smelling bad, there...

A reverse osmosis (RO) system is installed for the sole purpose of providing clean water by removing all impurities. The impure water containing the contaminants is called “wastewater,” and the...