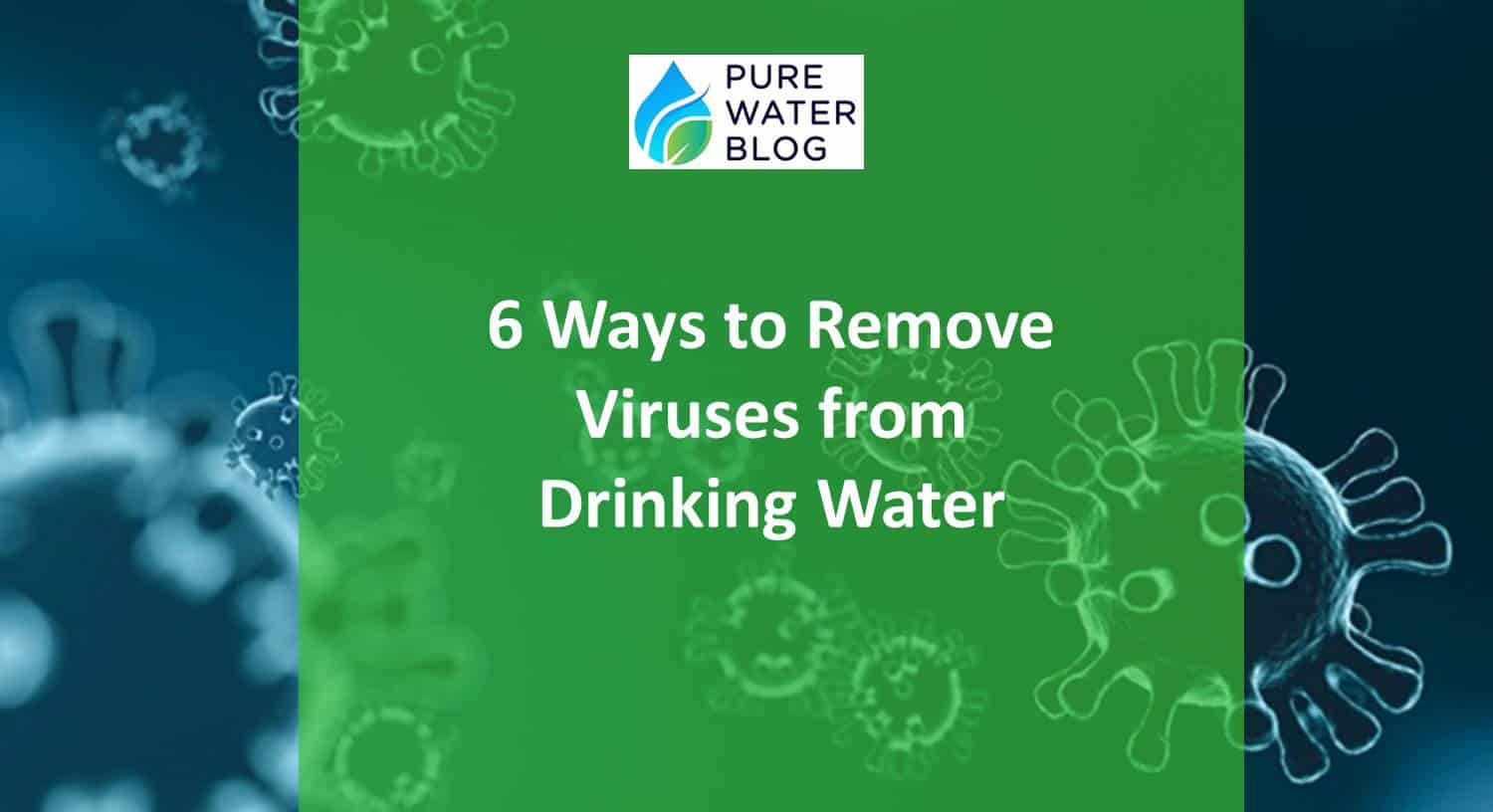 Are you concerned about viruses in your drinking water?

Viruses in drinking water can cause serious health problems. They are found in almost all surface waters. Viruses can also be present in well water, particularly if the groundwater has been contaminated by sewage or septic tank leakage.

The most common ways people get sick from viruses is through ingestion – either by drinking contaminated water or eating food that was prepared with contaminated water. Fortunately, there are many ways to remove viruses from your tap and well water.

In this article, we cover 6 methods that can neutralize viruses and make your water safe to drink – everything from filtration to disinfection to distillation. Continue reading to learn everything you need to know about protecting yourself and your loved ones from water-borne viruses.

Viruses can be found in many places, including drinking water.

Water-borne viruses that cause disease include:

These viruses can cause a variety of serious medical conditions, including:

Are viruses in tap water

Municipal water supplies are required by the US Environmental Protection Agency to disinfect water with chlorine or another disinfectant. This usually eliminates viruses, although in rare instances, a small number may still be present.

If all tap water is disinfected, how can viruses be present?

Fortunately, it is very rate for public water supplies to have viruses. Disinfection is very effective and usually kills all pathogens. However, it’s not 100% effective.

The most common methods pathogens contaminate municipal water supplies is because of inadequate disinfection or cross-contamination at your house. Viruses are common in surface waters, and if your public water utility doesn’t add enough chlorine or if the mixing is inadequate, some of the pathogens can survive and make it to your tap.

Viruses and other pathogens are more common in well water than they are in tap water. This is because private drinking water it is not subject to the same regulations that public water supplies are. Without disinfection, there is no guarantee that the water is free of viruses. In fact, groundwater can be contaminated by poorly functioning septic systems or agricultural runoff.

Well water is most often contaminated by microorganisms because of faulty septic systems, agricultural runoff that contains livestock waste, and wildlife.

Fortunately, there are a number of ways to remove viruses from your drinking water. The most common are:

Each method has its own benefits and drawbacks. Let’s take a closer look at each one.

Reverse osmosis works by forcing water through a membrane, which lets clean water pass through but blocks anything larger. Reverse osmosis systems can be used to treat all household drinking and cooking water or just at the point-of-use.

Although RO filters can remove viruses, not all of them are certified for virus removal. It is generally recommended that an ultraviolet (UV) light disinfection system be included after RO treatment to fully disinfect the water.

Distillation is very effective at removing viruses from drinking water. It disinfects water, through high temperature, and destroys viruses, bacteria, parasites, and cysts.

It works by boiling water and then condensing the vapor into a storage tank. The purified water is pumped to a pressure tank where the water is distributed throughout the house.

A significant drawback to distillation is that it significant energy to boil water. It is one of the most expensive methods available to remove viruses from drinking water. For this reason, distillation is primarily used as a point-of-use treatment method rather than the whole house.

Ultraviolet light is a very powerful disinfectant that can remove viruses from water. UV light kills viruses by disrupting their DNA, which prevents them from reproducing and infecting cells in the human body.

UV light comes in three main frequencies: UVA, UVB, and UVC. The most effective frequency for disinfection is UVC, which has a wavelength of 254 nanometers (nm).

UV light systems are relatively inexpensive to purchase and operate. They also have the added benefit of not adding any chemicals to the water.

UV light systems can be used for point-of-use disinfection at the kitchen sink or bathtub. They are also commonly paired with a reverse osmosis system to ensure that viruses have been removed from drinking water before it is distributed throughout the house.

The biggest drawback of using UV treatment is that it doesn’t work well with turbid water (water containing lots of particles). For this reason, UV light systems almost always have pre-filtration units to remove suspended solids, turbidity, and color.

Chemical disinfection is very effective at destroying viruses in water. The primary disinfecting chemical used is sodium hypochlorite (NaOCl), which is commonly sold as bleach.

This method has been used for many years. Chlorine disinfection is used to treat drinking water in most cities and towns around the world today. However, because of concerns about harmful byproducts from chlorination, new regulations have been introduced that limit how much chlorine can be added to treated drinking water.

Chemical disinfectants that are used to treat drinking water include:

Generally, chemical disinfection is only used for public drinking water supplies and not private systems. This is because the chemicals used are dangerous to handle and require detailed control and monitoring to ensure the correct dosage is used. Problems can arise is too little or too much disinfectant is used.

Boiling is a very effective way to remove viruses from drinking water. To disinfect water, it is brought to a rolling boil and boiled for at least one minute.

This is an old-fashioned method that is still used in many parts of the world. The biggest drawback to this method is that it requires energy to heat the water.

Boiling water also removes other contaminants, such as bacteria and volatile organic compounds.

Boiling is considered an emergency or temporary method. It is not suitable for permanent treatment to remove viruses.

Filtration is generally not considered effective for removing viruses from water.

Filtration methods include the following:

The following table lists the most commonly used treatment methods and how well they remove viruses, bacteria, and protozoa.

Activated carbon filters can be used to remove some types of chemical contamination from drinking water. Carbon does function as a crude filter – it can remove suspended particles larger than 100 microns in size. However, viruses and other microbes that are smaller than 0.01 microns in size, which is too small to be filtered out.

Water softeners are often used to improve the taste and smell of drinking water. However, water softeners do not remove viruses from water.

Water softeners work by replacing minerals (such as calcium and magnesium) that cause hardness in water with sodium. The softened water is then less likely to form scale or soap scum. Water softeners are effective at removing the minerals that cause water hardness.

Water softeners are not effective at removing bacteria, chemicals or viruses from drinking water.

Filters are designed to remove suspended particles in water – rust, dirt, turbidity, and color. They are most effective with particles 1 micron and larger. Filters are not able to remove viruses because viruses are too small.

Particles filters, including micro-filters, ultra-filters are not able to remove viruses from water. The only exception is nanoifilters which can filter out particles as small as 0.001 microns – viruses are between 0.25 and 0.4 microns.

If you purchase a treatment system to remove viruses from your drinking water, you should look for a unit that is certified to remove viruses by a third-party testing organization. Testing agencies like NSF and ANSI conduct testing and establish standards for treatment equipment so consumers can be confident they perform as claimed.

Ultraviolet disinfection: UV light systems that kill viruses and other pathogens in drinking water are certified to NSF/ANSI 55.

Distillation systems: NSF/ANSI 62 certification applies to treatment systems that boil water and collect the water vapor as it condenses.

Reverse osmosis systems: NSF/ANSI 58 is the certification standard for treatment systems that use semi-permeable membranes to treat contaminated water.

So what should you do if your drinking water has viruses? There are several ways to remove them. Reverse osmosis, distillation, UV light, chemical disinfection and boiling all work well for removing bacteria from the water. And ultrafiltration is a method that can be used in situations where RO or distillation cannot be used.

This article presented the six most common methods of water treatment and explained how they treat water and remove viruses. If you are looking for a treatment system to remove viruses from your drinking water, be sure to look for one that is certified by a third-party testing organization like NSF or ANSI.

link to Does Reverse Osmosis Remove Radon from Drinking Water?

Radon is a radioactive gas that is found in some groundwater. It is considered a health hazard and can cause lung cancer if you are exposed to it over a long period of time. Some people may be...